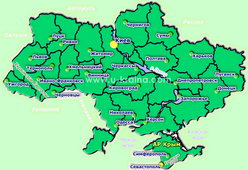 Ukraine (Ukrayina) is a country in Eastern Europe. It borders Russia to the east, Belarus to the north, Poland, Slovakia and Hungary to the west, Romania and Moldova to the southwest, and the Black Sea and Sea of Azov to the south. The city of Kyiv is both the capital and the largest city of Ukraine.

The population of Ukraine are Ukrainians, Russians, Jews, Byelorussians, Moldovians, Poles and Bulgarians and other nations and nationalities. There are 24 administrative regions and the Crimean autonomous republic in Ukraine.

95% of the Ukrainian area is flat and the rest of it is mountainous. The Ukrainian Carpathians and the Crimean Mountains make up those 5% of its area. Ukraine is washed by the Black Sea and the se.a of Azov and it has very important ports; The major rivers are the Dnieper, the Dniester, the Bug, the Donets and others.

Ukraine has many industrial raw materials, it has rich deposits of iron, metals, coal, oil, gas, different ores and other natural resources. The country has metallurgical and heavy industries, well developed tourist sector. It is the agricultural country.

Ukraine is one of the founding members of the United Nations Organisation and participates in the work of many international organizations.